Well, it's that time of the month again. Taria and I have been brainstorming for the past few weeks and were itching to get cooking. I reorganized my pantry, and ended up with far too many ideas to complete, so this is what made the cut. We cooked at a leisurely pace for 5 hours, but were still exhausted at the end. 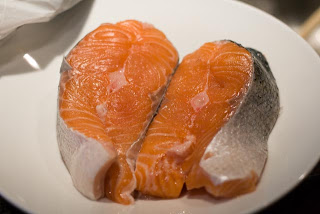 I started with some nice salmon steaks cut fresh and marinated in truffle oil, along with some local fresh goat cheese. 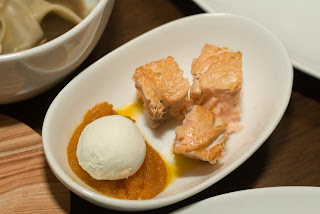 The salmon was grilled on a cedar plank, and accompanied by a ball of fresh local goat cheese and carrotsauce. This was made the same way as applesauce, but with carrots, and added a nice sweetness to the dish. This blended nicely with the creaminess of the cheese and the earthiness of the salmon. 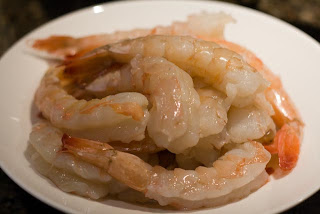 Next, I had some jumbo shrimp, approximately 12U (12 per pound). I usually go for the bigger ones, which yield more meat/shell ratio and less shrimp to clean. 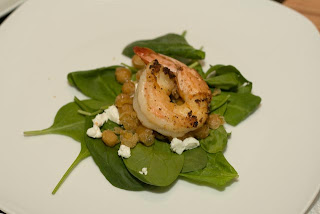 I pan seared the shrimp, crumbled some goat cheese, fried garbanzo bean and topped over spinach with a warm bacon vinaigrette. 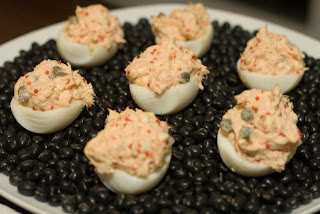 I found that I had crab, caviar, and capers, so I decided to make devllied eggs. These were probably the richest deviled eggs ever. I used a traditional combination of dijon, mayonnaise, paprika, etc, but added some cream cheese to send them over the top. 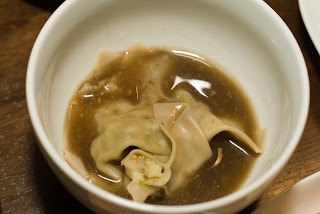 I boiled down some mushroom broth and added wontons that I made from truffle oil, shelled edamame, roasted edamame, and sauteed shrimp. 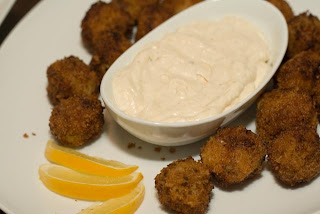 Taria mixed chicken sausage with gruyere, which was then breaded and fried. This was finished with a lemon aioli. 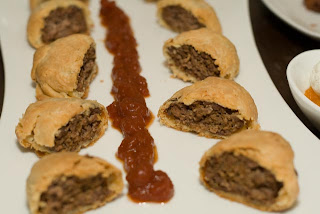 Next, she made bison meatballs which were wrapped in dough to make empanadas, which were accompanied by homemade ketchup. 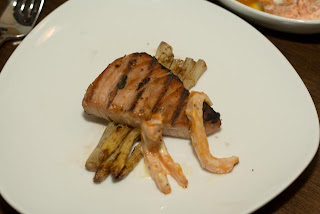 She then grilled Ahi tuna which was marinated in coconut milk. This was served with grilled peppers tossed in a tarragon sauce, and grilled white asparagus tossed in balsamic. 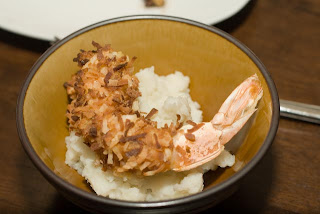 The rest of the shrimp I breaded to make coconut shrimp and served over white sweet potatoes mashed with coconut milk. 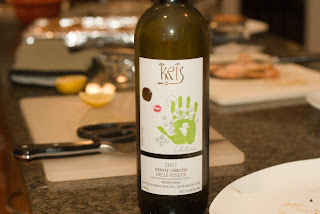 This time, a Pinot Grigio. 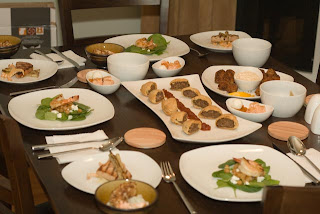 For desert, I used fresh figs and local honey harvested by my doctor (yes, he has bees). I mixed this with fresh fig and honey goat cheese and spooned into muffin tins lined with pie dough. These were served in a pool of coconut froth.

The funny thing is, this time we decided to cook smaller portions so we didn't end up with so much food. Obviously, that didn't work.
Posted by Food at 10:41 PM 1 comment:

What would Spongebob do with leftover pumpkin?

I love summer squash, but also enjoy winter squash.  There are many creative things to do with a pumpkin. It does not have to be limited to desserts.

Let's also look at scallops. Many people despise these tiny ocean treasures because they have never experienced a properly prepared one. I prefer the larger sea scallops to the smaller bay scallops. I always choose the ones with the most orange tones. The color is obtained when the females carrying eggs are harvested, and the shock causes the eggs to rupture. Fishermen usually throw these back due to the discoloration, but a good fishmonger will have a few. You are left with somewhat of a 'caviar' filled shellfish. These tend to taste a bit sweeter.

Preparation is simple. First, rinse in cold water and pat dry. Then, I mix equal parts olive oil and butter in a pan to saute. Butter for the taste, and olive oil for the higher smoking point. Many people use the same fat to fry in all of the time. This is what results in a kitchen full of smoke. I use peanut oil for high temperature frying (which is why Chinese takeout is always so good). I use olive oil for sautes, and butter for light sweats and such. Once you have the scallops in the pan, a little salt and pepper is all you need. Too many flavors will overwhelm them. Also, do not cook them too long. This will make them rubbery and fishy. 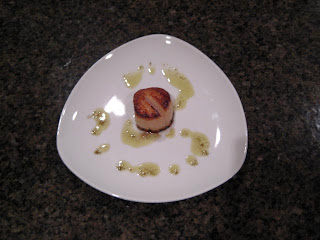 One thing to do is simmer some fresh basil with olive oil to make a simple basil oil. This is great for an appetizer. This time, I served them over some Asian udon noodles, which are usually made of buckwheat. They are usually served in a broth, sort of like a noodle soup.

Then came the broth. I simmered some cooked pumpkin puree with chicken broth, white wine, and some spices until it thickened slightly. 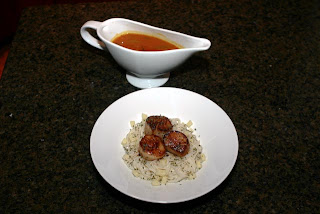 I know this one may be a little out of the comfort zone for some readers, but if you like pasta, pumpkin, and seafood, you never know.
Posted by Food at 10:52 AM 1 comment: