Oops we did it again

It's been a while since our last cooking session, and we were eager to cook. The funny thing is that we did not have any preplanned ideas, but we knew that would come. We both headed to the markets to determine what the ingredients would be, and here is what we came up with.

T started us off with the appetizers. The roasted pepper bruschetta consisted of fresh roasted peppers tossed with basil & olive oil. 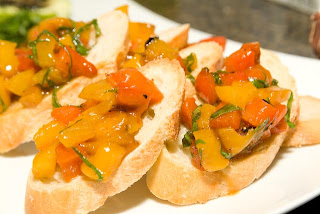 With this, she served Gorgonzola & arugula stuffed zucchini. The arugula was wilted and sauteed with onion and brown sugar, then roasted in the zucchini. 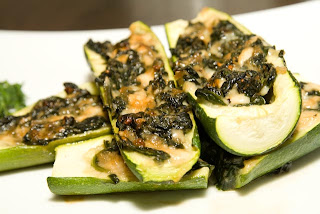 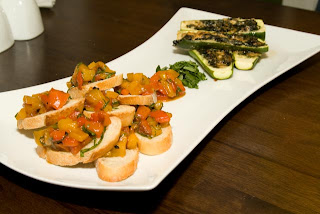 Next was drunken shrimp with Meyer lemon vinaigrette. The shrimp were marinated in white wine, olive oil, and chives before being sauteed and topped with the vinaigrette. 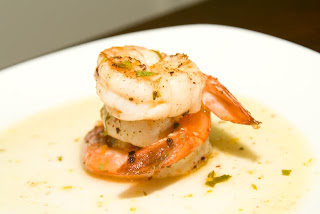 As a side dish, broccolini and pears were blanched and sauteed. 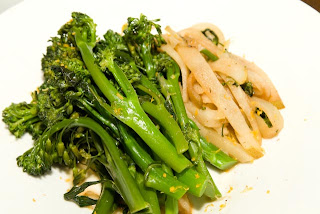 Her final dish was a pan seared pork chop with kiwi butter and roasted leeks. The pork was covered in a rub consisting of white pepper, saffron, cardamon, corriander, onion, garlic powder, and Hungarian paprika for one hour, then seared and baked over a white wine tarragon broth. The leeks were roasted, covered with parmesan bread crumbs, and served with a sharp cheddar sauce. 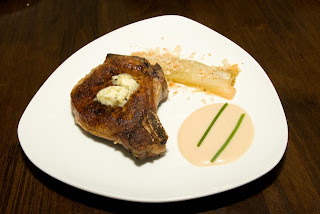 And chicken for the non-pork eater. (The act of not eating pork will automatically disqualify you from receiving citizenship in North Carolina) 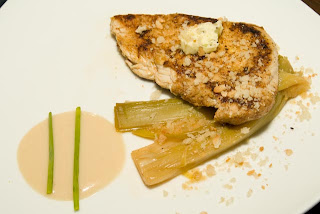 My first dish was wok seared tuna over coconut dal. I marinated the tuna in soy sauce, lime juice, tamarind, and brown sugar. The dal was made from yellow split peas, chicken broth, coconut milk, and a spice blend of toasted mustard seed, cinnamon, and cumin. 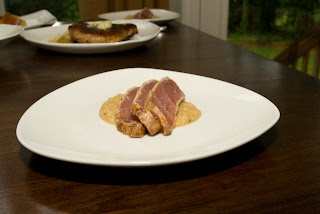 I always want to try vegetarian dishes that sound good, but normally cannot do without meat. This time, I went a step further with a vegan gravy. For those who don't know what a vegan is, look it up. This can be hilarious when mistaken. I worked at a sandwich shop in Boone, where we sold vegan muffins. One day two older ladies asked one of my cowokers, "What's a veggin' muffin" to which she replied, "oh you know, they just sit there and veg." The dishes sometimes sound wierd, but can be very surprisingly close to the real thing.

My dish was portobello wellington with vegan cashew gravy and braised greens. the portobellos were stuffed with a mixture of shitakes, garlic, and leeks, then wrapped in phyllo and baked. The gravy consisted of cashews, cornstarch, water, and salt which were blended and simmered until thickened. 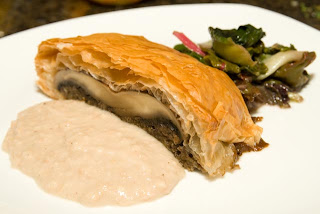 For dessert, I made apricot gnocchi with chocolate ganache and pistachio-mint pesto. I steamed and riced Yukon Gold potatoes, then mixed with nutmeg, flour and blended apricots. The pesto was made with pistachios, mint, olive oil, and raw sugar. 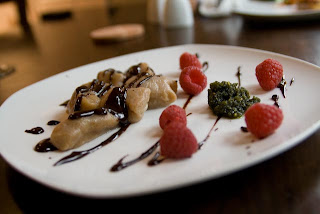 Of course, we have to wash it down. I made mint mojitos by muddling mint and sugar, then filled the glass with dark rum. After soaking a bit, and chilling in a shaker, i mixed with Sprite for a refreshing after dinner drink. 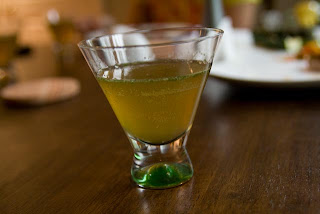 That's it for this time. Thanks for tuning in.
Posted by Food at 10:29 AM No comments: