I heard a great chef say, "any trained monkey can grill a tenderloin, but taking a working cut of meat and making it tender and flavorful.....now that's talent." Take chuck, for example. I like to begin with a blade meat tenderizer, but a fork will work as well. I then made a marinade by combining coriander, black mustard seed, minced onion, cumin, garlic, ginger, Worcestershire sauce, soy sauce, dill, flat leaf parsley, lime juice, and rice wine vinegar. After marinating at least a day, I seared the beef in a skillet until a nice crust formed. I placed on a rack over a dish in a 275 degree oven until the internal temperature reached 145 since my target was 150.

I received some fresh yellow heirloom tomatoes from a friend, and combined them with roasted white peppers and fresh Silver Queen corn. I muddled raw sugar with basil and added lime juice to make a dressing for the salad.

My favorite rice lately involves coconut milk and saffron. If you cook rice at least once or twice a week, a rice cooker is a great investment. I prefer the fuzzy logic ones, as they automatically sense the temperature and amount of rice to cook. Perfect every time. 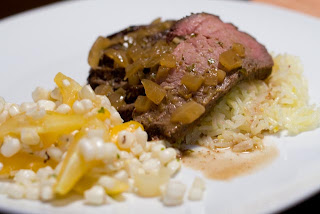 this looks good. I need to try this with a chuck roast as well. Where in the world did you get white peppers??

At the farmer's market. I think I saw some there just last week.